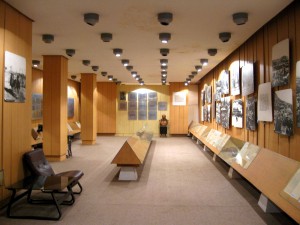 Present Foča during the period of People’s Liberation Struggle, when Foča was a center of wider territory liberated by the Partisans. The Central Committee of the Communist Party of Yugoslavia and the Supreme Staff headed by Tito were located in Foča in that period. Organization of the military, political and background structure of People’s Liberation Struggle of Yugoslavia had been arranged. At the same time help and medical assistance was provided for Partisans frozen during march over Igman. During that time Moša Pijade writes memorable “Regulations of Foča“ which becomes basis of future Socialist Yugoslavia.